An enormous, heartfelt THANK YOU to the Dave & Cheryl Duffield Foundation for their extremely generous grant.
Fundraising is always a challenge for the non profit organizations, particularly for those not always utilized on a regular basis.  Of late, Sclar has responded to several small fires and with the devastation suffered by many during the Caldor Fire our resources were taxed.  This grant will provide the means to re-stock much needed supplies, equipment as well as enhance our inventory of ranch items needed to set up and monitor the care and sheltering of a large number of animals.  Stock tanks, water buckets, halters and lead ropes (because we see to it all necessary halters etc. are sent home with the animal when they return), feeders...the list goes on and on.
THANK YOU isn't enough, but the recognition and appreciation is so very welcome.

Hundreds of homes burned, thousands of families displaced under order of evacuation - many for extended periods of three weeks and more.   El Dorado County Animal Services and a myriad of volunteers rallied to do what they could to provide a safe environment for those animals displaced.

Sclar is proud that over 500 animals were cared for at the Amador County Fairgrounds where we fed, watered, walked, talked to and saw to necessary veterinary care.  Some had no homes to which they could return.  For the animals that were surrendered at the Amador County Fairgrounds, we arranged homes.  Three homeless goats went home with our Stephanie A. and one homeless sow went home with Aimee V.  Aforementioned sow DID NOT want to get in the trailer to go home and volunteers (5-6) had quite a little tussle convincing the 300 + lb hog that it was in her best interest.

Working with:   Rebekah C., Santa Cruz County Equine Evacuation;  CERT teams from Sacramento County and Elk Grove-Galt;  El Dorado County Search and Rescue; UCD Veterinary team; USDA; Helping Hands Sacramento, and many convergent volunteers, we were able to provide loving care to all  these critters.  Even though the  duration of the event was a fatigue factor for our volunteers all responders rose to the occasion and smiled through the grit and heat of the late summer.

Our retail community certainly stepped up, offering feed, supplies, deliveries and support wherever they could, including merchants:

Life away from home

THE KING FIRE
September 2014  Whew!  What to say about this event?  The eyes of the nation were tuned in to the media coverage for the huge fire.  Hundreds of individuals affected, either by evacuation orders, friends and family displaced, or actual loss sustained to their properties.  Those under order of evacuation needed some place to take their animals until they could return home. Sclar was able to assist Animal Services by transporting and caring for hundreds of animals, while their homes were under order of evacuation.  With the partnering of El Dorado County Search and Rescue, Mounted Division during this event, Sclar was able to provide a 24/7 intake and housing station at the El Dorado County fairgrounds. 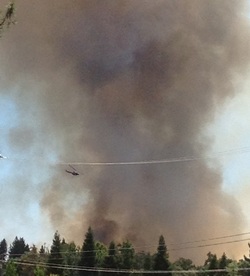 More kudos to our fire responders! We've said it before and we'll say it again - the firefighters are awesome!  Sclar was activated although no animal evacuations were needed, we did respond with a trailer team and were staging at Dawson Oil.  Released at 4:18 pm.
This fire destroyed one home and several outbuildings.
The fire came up quickly and involved 116 acres
For more information on this fire see Cal Fire Incident Information page:
Salmon Falls Fire (Salmon Fire)
August 2012

We all knew we were due and sure enough, fire broke out in the Salmon Falls area, threatening several horse properties.  Sclar was activated in the late afternoon.  Our fire responders are  so awesome that, before we could arrive at the designated staging area, they had eliminated the threat to residential properties. That fire involved 108 acres.

Quite early in the season, Sclar was activated for the fire in the Rescue/Luneman Rd. area. Many of us were stunned to be called out for a fast moving fire in an area that required evacuation. Thanks once again to our extremely capable fire response personnel, who soon had the incident under control. Things were quite tense for a while. Fortunately, no animal evacuations were necessary.  Our turnout was excellent and we had 7 trailers on scene within an hour, and a total of 15 people, with more available if the situation progressed.

Were we ready for this?  Yes we were!! Were we expecting the call?  Well....maybe not THAT early in the spring.

Sclar was on official standby for the Angora fire at South Lake Tahoe. At 7am on  Tuesday, June 27, Henry Brzezinski, who is Chief of El Dorado County Animal Services, placed Sclar on standby status for the Angora fire.  All members were notified immediately by our telephone tree and prepared for call-out. As the large animals were successfully evacuated by local resources, Sclar’s trailer teams were on standby to serve as a rapid, efficient means of moving the many small animals whose evacuation shelter was at risk of being threatened by the rapidly expanding fire. We remained on standby alert until 8:00pm on June 28, when we were officially informed that we could “stand down” because the fire appeared to be under control. Many thanks to all of our members who made arrangements to leave quickly if and when we were notified to proceed. Henry Brzezinski, in his stand-down call, passed along his thanks to all Sclar members as well as appreciation from Norma Santiago, who is the El Dorado County supervisor from the Lake Tahoe region.  Good job, folks!!

Shingle Springs Fire
August 31, 2006.
As many of you know, we were activated by Animal Services the  evening of  August 31, 2006. Even though actual evacuations were unnecessary, we had 4 truck/ trailers respond with several more en route before we were released. The equestrian arena on South Shingle road was our staging area.  We called Dr. David Turoff and alerted the area evacuation site we had enrolled last year.

While the duration of the call-out was a relatively short time, it does illustrate how effective we can and will be if needed. Nancy K. was invaluable in calling volunteers.  If you did not receive a call, it was because we concentrated on calling out the volunteers in the vicinity, who could respond the quickest, first.  Then calls were made to the remainder of the membership as time allowed before we were released. This was not a wasted effort!  Animal Services was impressed with our timely response and most appreciative of the support. We were also in contact with Noah’s Wish. All in all, a very productive effort.  A HUGE KUDOS and ATTA BOY/GIRL to ALL THE VOLUNTEERS who dropped what they were doing to respond!!!

Join us in our efforts to continue increasing coverage in our county. Let's work together to evacuate our animals, when, not if, disaster strikes.

Please see the FAQ section for more about the group